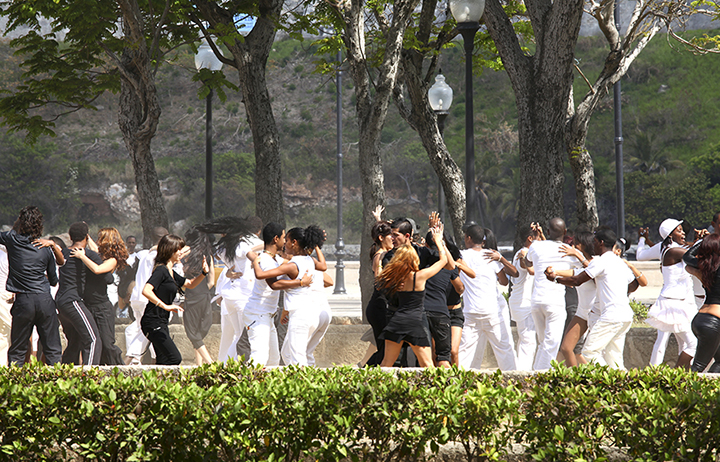 The salsa is a tantalising and sexual dance style.

The Salsa is another dance that has its origins in Cuba and the Afro-Cuban people. It is a version of the Rumba and is associated with a salsa style of music. Different cities have adopted their own version of the Salsa such as the New York Salsa, Los Angeles style and Cuban Casino style. The traditional salsa dance sees a lot of movement below the waist with the upper body remaining relatively still.

It can be danced to any eight beat music but is generally danced to what is traditionally called salsa music. The steps are done quickly and a lot of fancy footwork is involved. Many styles have developed but they all contain the eight beat dance and weight shifts and body movements to the beat of the music.

The New York style has been influenced by the jazz movement and has more solo dancing than other styles. It is done in a more confined area of the dance floor and is danced on the second beat of the music.

The Los Angeles style has been influenced by the swing dancing and the Mambo with acrobatics and jumps. It is a very theatrical and sensuous style. The main movements in this style are a forward/backward motion and a cross partner lead. This style is danced on the first beat of the music.

Columbian or Cali style is named after the city of Cali in Columbia that has the name of the “World’s Salsa Capital”. The footwork is very fast with many small steps and does not have any cross partner movements seen in LA style. The footwork needs to be very precise and is quite intricate.

Cuban or Casino style is popular in many parts of the world including Europe, North and Latin America and some Middle Eastern countries. The term casino is a Cuban word for dance halls and this style is often called Casino. The origin of this style is a partner dance known as Cuban Son that has had turns and figure movements added to it. There are no steps on the fifth and eight beats but the body moves on these counts to add rhythm to the dance. This style is a more improvised style than others and is a very social dance.

Casino Miami style was started by the Cuban people who moved to Florida and this style does not see the dramatic body weight shifts as seen in the other styles. It is a fusion of many styles including Afro-American. The main difference with this style is the backward break is done on a diagonal and not straight back.

There are many dance moves in the Salsa and they include: