Belly dancing has a long history but not a lot is known exactly where it originated and how it started. It is considered a folk dance in the Middle East that has grown considerably in popularity in the western nations. There are a few Greek and Roman documentation of a similar dance that uses writhing movements of the torso seen in Asia Minor and some European countries like Spain.

Later in the 18th and 19th centuries the dance we know today as belly dancing is extensively documented by visitors to the Middle East. 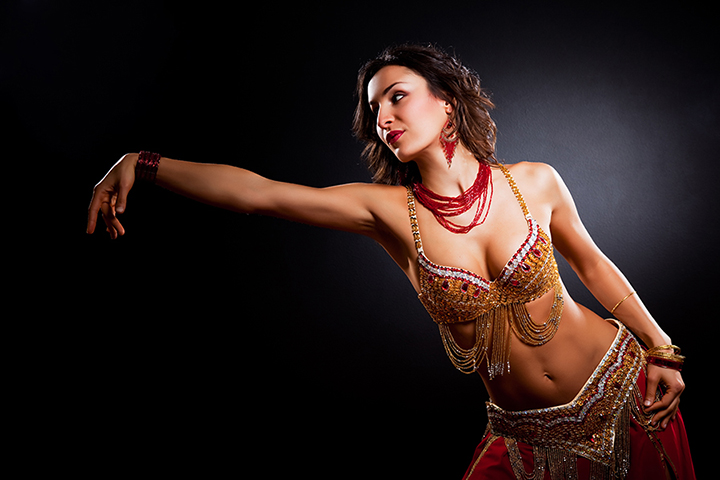 The belly dance is done as a folk dance or as a performance dance.

This dance is done by groups at social gatherings. It is done by people with little or no experience and they wear their everyday clothes and not fancy costumes. Men, women and children will perform this dance.

This dance is performed by women in costume, often with a bare midriff. This is a more polished dance performance.

Belly dancing became popular in the western countries when the life of harems was romanticised. It was performed at World Fairs and was introduced to a whole new audience. It was called eastern or oriental dancing.

It was during the World Fair in 1883 in Chicago that the term Belly Dancing was first used by Sol Bloom the director of entertainment at the Fair.

Since then the dance has become popular as form of exercise as well as an exhibition dance.

The usual dress is a bra style top and a long skirt or the bra style top and harem pants. The costumes are often embellished with jewels, coins, beads and tassels and fringes. The pants or skirt reveals the belly button and is often studded with a jewel.