This style of dance is from Andalusia in Spain and was first documented around 1774. It grew out of Romani and Andalusian music and dancing styles. Flamenco includes singing, dancing, music and hand clapping. It has since become popular all around the world and there are flamenco academies in many countries including Japan.

The word flamenco was not recorded as being used before the 18th century. The word comes from ‘flama’ that means flame and fire and ‘enco’ means having similarity to or is like. So the word flamenco means like fire or flame. It has evolved over the years to the Flamenco we see today that includes the dance and music. 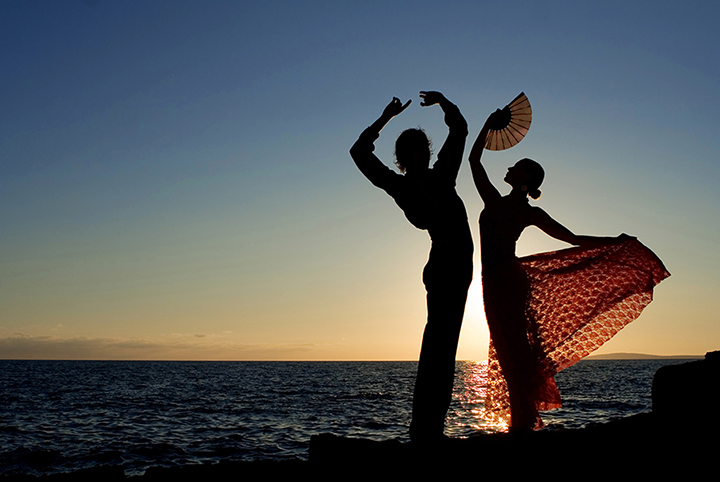 The flamenco dance is known for its intensity and proud stance of the dancer. The arms and hands are use very expressively as well as foot stamping and hand clapping.

‘Flamenco puro’ is an unaccompanied dance style that is considered to be closest to the original gitano style from Andalusia and is also improvised rather than choreographed. Hand clapping or the use of castanets is usually not used in this form.

Classical Flamenco is the style we see today performed that is choreographed and performed by Spanish dancers. It uses aspects of the Spanish dance the Seguidilla and is danced very proud and with an upright stance. Women often have a slight bend backward in the dance while the man is very upright. The hips aren't moved very much and the body is held quite tight with the use of long arms like a ballerina.

Modern flamenco is a highly technical dance with very fast footwork that shows absolute and perfect precision. The dancers may also use fans, shawls and castanets for this style of flamenco.

The dance is considered to be for older people as young people do not have the necessary maturity to convey the soul of the flamenco dance and many dance from their 30’s well into their 50’s and beyond.

The music that accompanies the dance is also very technical and takes years of learning. The touch for the guitar has many variations such as graceful, short, cool, lively and virtuous.

The dance steps are often strong and stomping in a fierce and determined manner. The heel and the ball of the foot are used to stomp. The steps are in a rhythmic framework that forms a pattern for the dance.

The dance has a 12 beat rhythm that is of two groups of three and three groups of two.